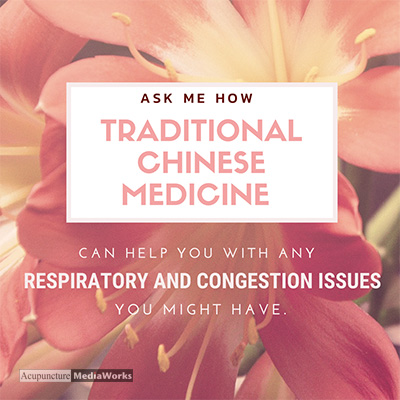 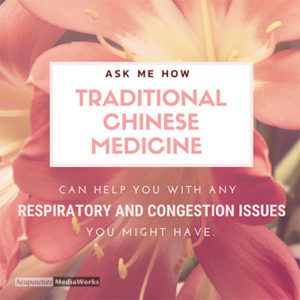 Chinese Medicine and the Lungs

Our lungs are incredibly important. Without properly functioning lungs, we cease to exist. In the United States alone, nearly 200,000 people die every year from forms of respiratory disease. Respiratory diseases include both acute and chronic conditions, everything from the flu to emphysema. While many of these ailments can be prevented, there are others not avoidable due to things like genetics.

In Traditional Chinese Medicine (TCM), the lungs play a very strange role because they are considered the most external of the internal organs. With every breath taken, the lungs come into contact with the outside world. Also, any part of the body that has anything to do with breathing can be considered part of the respiratory system. This includes the nose, bronchi, sinuses, the diaphragm and even the skin, to some degree.

What’s nice about TCM, is it approaches the treatment of any condition on a very individualized basis. Every person gets a different treatment protocol depending on their symptoms and diagnosis. There are also accessory modalities like cupping that can help pull toxins out of the lungs and herbal formulas that can be added to treat almost any respiratory condition. Here are some ways that TCM can help those suffering with respiratory issues.

Acupuncture helps build or tonify the energy within the respiratory system. This energy is called Qi (pronounced “chee”). When lung Qi is strong and the body is balanced, then respiratory issues rarely become an issue.  Acupuncture stimulates blood flow which carries oxygen to every cell in the body. The increase blood flow boosts the immune system, dilates the bronchioles and produces anti-inflammatory agents that help improve breathing by relaxing the muscles.

·         Kidney 27 – This point is located bilaterally on the chest, just below the collarbone. Kidney 27 is used to open the lungs, reduce coughing and encourage full breathing.

·         Lung 5 – Lung 5 is located at the end of the outer crease of the elbow, just to the outside of the tendon. This point opens up the airways and the throat, while reducing coughing and wheezing.

·         Ren 17 – This point is located in the middle of the chest, midway between both nipples. It is used to open the chest, loosen up congestion, stop coughing and encourage full breathing.

Combinations of herbs, known as formulas are used frequently in TCM. One of the most commonly used individual herbs is Wu Wei Zi, also known as Schisandra. This herb is used to treat asthma, wheezing, and boost immune function.

A popular formula choice of TCM practitioners is Bi Yan Pian. This formula works to clear the nasal passages and it usually accomplishes this within five days to a week. The herbs in Bi Yan Pian work to disperse wind, expel toxins, relieve inflammation and dissolve phlegm.

For the lungs and respiratory system to be strong, they need proper nourishment, just like the rest of the body. Certain foods are good for increasing immunity, while also opening up the lungs and increasing circulation. Foods like garlic and onions reduce inflammation and fight off infections. Chili peppers open up the nasal passages, stimulating the mucus membranes and fighting invasion of nasty bacteria and viruses. Carrots and pumpkin are rich in vitamins A, C and lycopene. All of these vitamins affect lung health by lowering the chances of developing lung disease.

As you can see, TCM is a great way to deal with respiratory issues. If you are having difficulties dealing with these types of conditions, contact me and we will see what we can do to get you back on track.

Chinese Medicine Can Help with Respiratory Issues and Allergies